Caption translations made by:

Anja Perron (German). Check out her Facebookpage about releasing (in German).

In 1952, in New York, the physicist and engineer Lester Levenson had an insight that would change his life. After having a second serious heart attack, the doctors said that he was in such a bad state, that he could die at any moment. Now that Lester had no way out, he was determined to find out why he had ended up in this situation. He made some remarkable discoveries, recovered his health completely and lived for another 42 years, with an unshakeable inner peace. In this film we meet some of the people who knew him, and can tell us more.

The soundtrack is available at: http://www.thomasrydell.bandcamp.com

Go all the way - The Outtakes

The Outtakes (extra material) that for different reasons did not make it into the main film "Go all the way - a film about Lester Levenson". The participants talk about how releasing has changed their lives, how it works, and more info and stories about Lester. It is advisable that you see the main film first.

If you are interested in both films, please enter the coupon code LESTER for €3 discount at checkout.

Are you interested in a version with Captions (subtitles) in a different language?

2. Unzip the file, and put the film (.mp4) and the subtitles-file (.srt-file) in the same folder.

3. Use VLC media player (or similar) to watch the film. 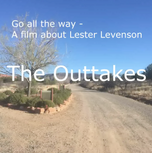